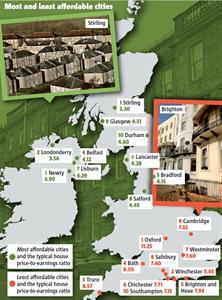 Living in the city has become harder to afford as house prices have started to recover, a new report has found.

The price of a home in a large town or city has grown by five per cent over the last year to reach £184,215 – or 5.8 times average earnings, according to research by Lloyds Bank.

A year ago, it was slightly less of a stretch for home buyers as city house prices typically cost 5.6 times wages.

‘Over the last five to ten years, affordability has marginally improved in most UK cities, as increases in earnings have kept up with house price rises in that time,’ said Marc Page, Lloyds Bank mortgages director.

‘However, the economic and lifestyle benefits often associated with residing in cities are continuing to drive demand, especially in the south of England.

‘With city house prices continuing to rise, affordability deteriorated slightly last year, but the trend since 2009 is positive for the majority of UK cities.’

Stirling in Scotland and Derry in Northern Ireland were named as Britain’s most affordable cities. House prices in those areas typically cost 3.3 times and 3.6 times local earnings respectively.

City dwellers will find their money goes further in a cluster of cities in Scotland, Northern Ireland and northern England. Among the most affordable urban areas to live are Glasgow, Belfast, Lisburn, Bradford and Salford.

At the other end of the scale, people in Oxford face a property price tag which is more than 11 times the local wage, followed by Winchester which has a price-to-earnings ration of nearly ten.

Schemes such as Help To Buy have unleashed demand for property but critics of government mortgage initiatives have argued the supply of homes is insufficient.

Housing minister Kris Hopkins insisted: ‘We are determined to ensure anyone who works hard and wants to get on the property ladder has the help they need to do so wherever they live.’