First-time buyers could get government-backed 95% mortgages. 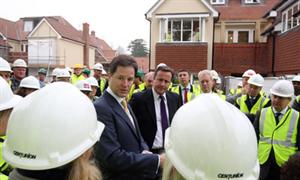 David Cameron and Nick Clegg have announced the introduction of taxpayer-backed 95% mortgages as part of a package of measures to help "unstick" the housing market and make the "dream of home ownership" a reality for more people.

The government's housing strategy, published on Monday, is designed to tackle the housing shortage, boost the economy, create jobs and give people the opportunity to get on the housing ladder.

On a visit to Boxgrove Gardens in Guildford, Surrey, Cameron and Clegg outlined plans to break the cycle in which "lenders won't lend, builders can't build and buyers can't buy".

"The housing market has got stuck," said Cameron. "We are determined as a coalition government to unstick that market, to get the market moving."

Among the plans is a scheme that will give a helping hand to 100,000 prospective buyers currently frozen out of the housing market because of the need for large deposits.

Banks are currently demanding deposits of up to 20% of the value of a property from first-time buyers. Under the proposals, homebuyers will be able to secure loans on a newly built home with a 5% deposit.

If the housing market suffered a severe downturn, the taxpayer could ultimately be responsible for a part of the loss under the scheme. But homebuyers would first lose their deposits and the loss to the taxpayer would be shared with the bank.

Other strands in the 78-page strategy include a £400m initiative to build up to 16,000 new homes by allowing an acceleration of investment in "ready-to-go" construction sites where work has stalled.

This involves new money and could see building work start next July. It is hoped that up to 3,200 of the proposed new properties will be affordable homes and the initiative will support up to 32,000 jobs.

Cameron said he wanted to make "the dream of home ownership" a reality for more people rather than move Britain towards a European model of renting more homes.

"I still think for most people they have a dream of owning their own flat or their own home and I don't see why we should give up that dream."

He said the government had enough funds to back the new housing strategy. "What the government is doing is using the strength of its balance sheet, as it were, to back the banks and to back people that want to get mortgages. The alternative is to sit back and see a stalled housing market."

Cameron said that, in some towns, a police officer married to a nurse would simply not be able to get on the housing ladder. "It's not just about the economy, it's also about people's hopes and dreams," he said.

"You always remember that moment, if you've done it, when you get that key and you walk into your first flat, it's a magic moment.

"It's a moment I want everyone in this country to have, not just better-off people. The dream of home ownership is something that should be achievable for everyone."

He added: "Those that do the right thing and work hard, we want to do right by."

Ed Balls, the shadow chancellor, said the £400m for stalled housing projects was "small beer" but a move in the right direction.

He told the BBC Radio 4 Today programme ahead of the announcement: "I think it is a good start it at last shows recognition from the government that we need action now to get the economy moving and to start building houses, get people into jobs.

"I am afraid it is rather small beer in its scale; it is a £400m boost, but George Osborne last year announced a £4bn cut in housing spending, and we have proposed building 25,000 homes this year and next using the bank bonus tax, which would be a considerably bigger boost to jobs in the construction sector.

"But at least it starts to show that David Cameron and George Osborne have realised that unless you act to get growth and jobs in our economy you can't get the deficit down and so I think it probably does show that at last the government is starting to shift."

Shelter, the housing and homelessness charity, said the measures to deliver more housing fell "far short" of the quarter of a million new homes needed each year to meet demand.

Shelter's chief executive, Campbell, Robb said: "We are concerned that schemes to help first-time buyers and council tenants will simply encourage people to overextend themselves, while doing nothing to address the sky-high cost of housing.

"This strategy also does almost nothing to help the growing number of families living in insecure private rented housing with hardly any protection from rogue landlords or unexpected rises in rent. Unfortunately these aren't the bold and radical solutions we need to solve a housing crisis that's been decades in the making."

Other strands of a strategy include:

• An extra £50m on top of the £100m from this year's budget towards an initiative to refurbish empty homes, mainly in deprived areas. Tackling the 700,000 empty homes across the country is described as a "top priority" in the strategy, and a key feature in the drive to increase the provision of affordable housing.

• Plans to consult on increasing discounts under right to buy – the scheme which allows social housing tenants to buy their properties. The discount will be up to half the value of the property, with receipts from the sales used to support the funding of new affordable homes for rent on a "one-to-one basis". The plan, first unveiled by Cameron last month, is expected to deliver 100,000 new homes and "support" 200,000 jobs.

Councils will be given new powers to reject applications for social housing from people who own a perfectly acceptable home of their own.

Clegg said he recognised the need for reforming the planning system to avoid building delays.

"We do need to make the planning system a bit more efficient so that we can get going with these things, so that we don't get these terrible delays," he said.

In a foreword to the government's new housing strategy, Cameron and Clegg say: "By the time we came to office, house building rates had reached lows not seen in peace time since the 1920s. The economic and social consequences of this failure have affected millions: costing jobs; forcing growing families to live in cramped conditions; leaving young people without much hope that they will ever own a home of their own.

"These problems – entrenched over decades – have deepened over the past few years. The housing market is one of the biggest victims of the credit crunch: lenders won't lend, so builders can't build and buyers can't buy.

"That lack of confidence is visible in derelict building sites and endless 'for sale' signs. It is doing huge damage to our economy and our society, so it is right for government to step in and take bold action to unblock the market.

"With this strategy we will unlock the housing market, get Britain building again, and give many more people the satisfaction and security that comes from stepping over their own threshold. These plans are ambitious – but we are determined to deliver on them."