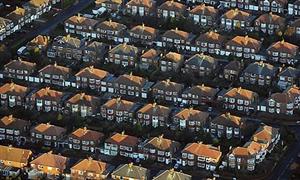 Policy Exchange calls for at least one new 'garden city' and changes to planning rules to deliver 300,000 houses a year
Share 78

British people pay the highest levels of property taxes in the developed world and more than twice the average for the 34 rich countries in the Organisation of Economic Co-operation and Development (OECD), according to a thinktank report.

The right-of-centre Policy Exchange said politicians should reject new levies on property – such as the "mansion tax" on residences worth over £2m favoured by the Liberal Democrats and Labour – and instead pledge to bring down housing costs by building 1.5m new homes by the end of the decade.

The report called for at least one new "garden city" and changes to planning rules to deliver 300,000 new houses a year.

Councils that fail to hit their own housing targets should be forced to release land to local people who want to design and build their own homes, said the thinktank.

The report calculated that property taxes including council tax, stamp duty, inheritance tax and capital gains tax amount to 4.1% of GDP in the UK – the highest in the OECD and well above the average 1.8%.

Alex Morton, head of housing and planning at Policy Exchange, said: "No other developed country taxes property more heavily than the UK. Yet rising house prices and falling levels of home ownership have led to many calling for an increase to land and property taxes.

"But these issues will only be solved by genuine reform of the outdated planning system, not a tax raid on peoples' homes. Politicians cannot try to do everything at once and must focus on the most crucial issues.

"The evidence shows where excess credit and under-supply exist, taxation or subsidy can only have a limited impact. That is why policymakers should ignore calls for a new round of property taxes and instead commit to spreading the benefits of home ownership and stabilising the UK economy by building at least 1.5m new homes over the course of the next parliament.

"This means serious reform of the planning system and creating new ways to deliver housing."